Dotzauer (the highest note of the chord is written in scordatura, so it sounds a♭):

but all the 4 manuscript copies and Paris First Edition (1824) show g unanimously.

It is difficult to understand this chord because there are only three notes (except Kellner, the highest notes are written in scordatura, so the chord is g-d-a♭). But in the Lute arrangement (in G minor), Bach wrote five notes. So we can understand easily this chord (upper staff is in tenor clef, lower staff is in bass clef, then they are d-f-a-c-e♭). 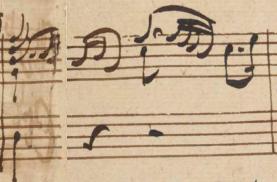 Transposed in C minor; then we have g-b♭-d-f-a♭:

Therefore also in Bach's autograph of Cello Suites, the bass note must have been g, not b♭. But in the New Bach Edition, Revised Edition (NBA rev. 4) , the editor (Andrew Talle) wrote "the bizarre chord" (page XLIV) and had changed it again into b♭, although in the New Bach Edition (not revised / 1988), Hans Eppstein wrote it correctly g, for the first time since Dotzauer.

This chord is not "bizarre". I will explain it.

We can see this chord in the other works of Bach (I have found 10 examples, 14 places), but before that, I will show you two examples from French composer, François Couperin's works.

And then, from Bach's works; for example:

The Well-Tempered Clavier, Book 2-3 C♯ major, Prelude bar 11: 1st chord. I transposed it in C major and added the reduction of harmony written by J. S. Bach himself (BWV 872a): 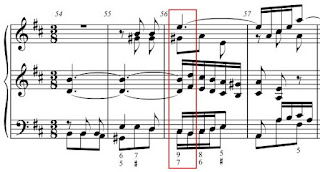 So "the bizarre chord" is no doubt composer's intention. We must not change it into b♭.