How do we play the Gigue of Partita No.6 ?

This article is not for Cello Suites but for

I don't know why Bach changed time signature when he engraved it. Probably he wanted to avoid to be played too fast. But in his original idea, both Gigue has same signature, so we must not play that of "Partita" too slowly. But most interpretations of this Gigue are very very slow. Why ? Because they play it in binary rhythm as it written.

Very interestingly, Froberger wrote the same gigue in two notations: in binary (4/4) and in ternary (3/4). We can consider the latter is the realisation of the former.
in Suite VII 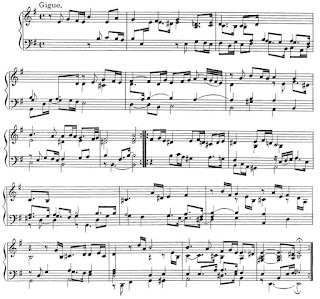 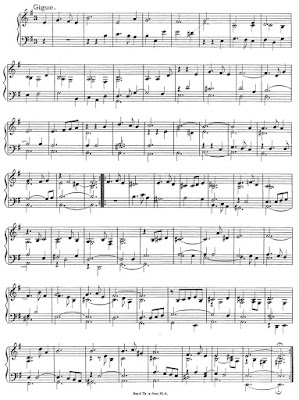 So, we will try to play Bach's "Gique" (according to his spelling) in ternary. I show you the 1st page of my realisation. 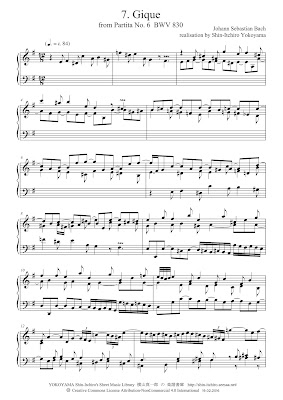 It is better you continue it. It will be a very interesting puzzle !

Complete score of my realisation is in IMSLP.
http://imslp.org/wiki/Partita_in_E_minor,_BWV_830_%28Bach,_Johann_Sebastian%29

Of course, my realisation is an example. There will be plural possibilities especially in the series of four 8th notes.

I can't believe no one played it in this way during probably 200 years ! This is a Gigue, why no one tried to play as a Gigue.

Yes, I know some players (such as Trevor Pinnock, András Schiff, etc.) play it in "ternary". This approach was proposed firstly by Howard Ferguson and after by Meredith Little and Natalie Jenne in their "Dance and the Music of J. S. Bach".

Email ThisBlogThis!Share to TwitterShare to FacebookShare to Pinterest
Labels: Bach's other works